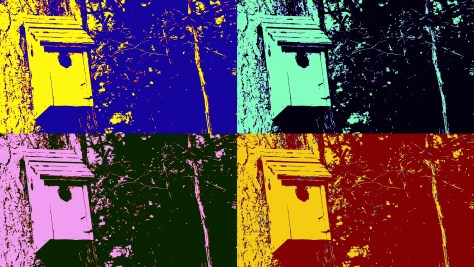 Alexandra is my daughter but I’ll let her speak for herself even if I can’t stand it.

At least she’s not mean.

But she’s a mess.

Like when I got home on Tuesday the Rescue Service was pulling her out of the mulch box and I had to put down my stuff and hose her off. Once they found the hose.

But never mind, she knows how to sew. We watch these fashion shows on TV and if I want something they are making, Mom can probably come up with it, only her version will survive in the washing machine.

She has a little bug about putting in a pocket, though. Like I told her I don’t mind carrying my phone around the house, but by the time she gets through, there is the pocket.

I wish she would make stuff for herself. I told her she can wear t-shirts on Parent Teacher night, but if it’s to my school she can’t wear the ones with messages.

I wish we didn’t live at the last stop on the school bus.

I’m glad my nose isn’t a monster schnoz like Martha Williams’s although when I saw her room I thought it might be worth it, just kidding.

I can’t talk in front of class anymore. My throat shuts and nothing comes out – not sure why.

Can a girl be an architect? They always say we can be things but sometimes that seems fake. I look at houses in the newspaper and I look at the ones my brother George builds and I always think I could make better ones. Dad says I should start by paying attention in trigonometry. What do they say to kids who want to be zookeepers?

Joey said something about being a painter so Dad set him up with rollers and stuff to do his own room over there, but Joey meant pictures of knights on horses and ships and things. Joey said he liked painting his room anyway.

Mom said I should start by making a birdhouse and work up. Up to what? A dog house? But it’s a good idea and I made one yesterday. I think the baby birdies will like their little bay window. It goes on the tree outside my room. Mom said learn from her, so I won’t go up the ladder to hang the birdhouse until someone else is home. (Then I can break a leg.)

The birds won’t need a birdhouse until next spring anyway. I wonder why they don’t go in them when it rains or snows, instead of just for baby time.

Okay, did I speak for myself enough now? Back to Mom.

One thought on “About Alexandra- Part 2”