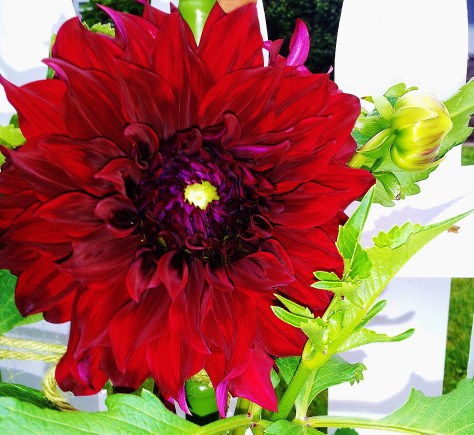 If it were any other kind of debris lying in the trash, it would have lain in a stupor of lifeless glare:
a neutered baby doll’s eyes, wide open and full of dull.
The unsalted Hotel butter had already lost that crisp and glossy blue shine.
Mangled BBQ chicken stinks with legs ripped and tossed.
A strawberry frozen yogurt container lay sideways without its top.
Milky stench offends nostrils, the repulsion of that which once touted
cool, tart confection
thrown into the din, awash in coffee grinds.
All other waste, a forgotten nuisance.

Thrown on top, still clustered together, are the sensual
A bouquet of dahlias!
Once fresh garden flowers, all dressed up and ready for a night of dancing
Soft dahlias, used to murmuring among themselves
drenched in dew under the white moon lighting of the night sky.

Magnificent ladies of the night,
a magenta red sexed up,
poised and arched in the middle,
slides slightly toward a light lavender,
whose purple texture, like wafers of thin cardboard paper,
draw irresistibly,
a hand
urgent to reach into the trash to feel the soft, the vibrant
lingering in the aftermath even though the life force is long gone.
The musky souls have carried on elsewhere
but there is no dampening of spirit here, for the rascals,
the garden fairies
who sing through garish yellow petals, send the peals of a clown laughing within the garnet red swirling and curling
into tiny within the center of the stigma.

A stem shudders, unable any longer to carry the head of once a slender white soul and the green cracks and the angel falls into ketchup away from the others.

2 thoughts on “Yellow and Scarlet Dahlias– All Laughing, All Sultry”