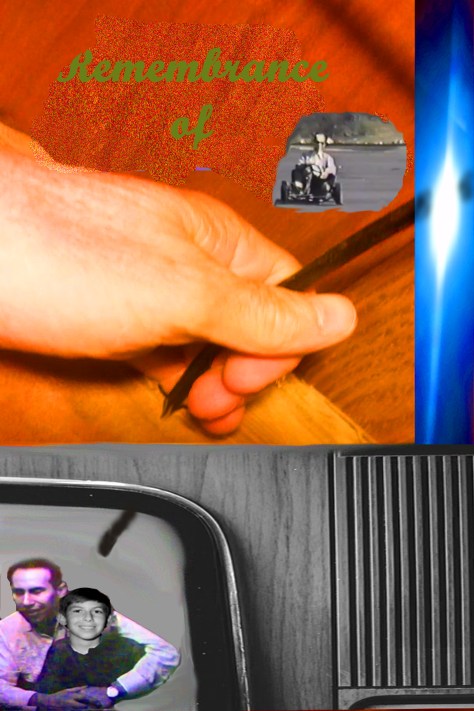 For most of my adult life, I would call my parents, but only once a week. Even into my retirement, I had to preserve my sense of independence. But their average age is now over ninety, so our daily phone calls reassure me they are stable and I energize them with my adventures.

During our latest call, Dad is focused, “Your Mom and I would like to watch television together in the living room. So we need to bring a new cable there and move the TV from our old bedroom. When can you come by to help?”

“To run the cable, Dad, you need a long enough drill bit and extra cable.”

We agree on a time and on my way I buy a long enough drill bit and bring extra cable.

I walk into their house and in the living room, I greet Mom. The room is very warm with a slight cleaning agent smell. Her eyes start to sparkle and she elicits a weak smile. My lips barely touch her dry, chapped, puckered lips and we both make a short, high-pitched “mmmmm” on contact. I pull away quickly; it still pains me to see her this way.

Two months ago, my mother went to the hospital because, again, she lost use of her legs from an undiagnosed chronic condition. After several weeks there with an intestinal infection, she went into rehab. During all that time, she significantly weakened and five weeks ago came home where my father and a 24-hour aide now care for her. So in the living room, Mom inhabits a hospital bed except for once a day when she is hoisted into a wheel chair.

I go around her bed and kiss Dad, who is also happy to see me.

Entering my parents’ bedroom, I smell Mom’s flowery perfume emanating from the 1960’s. I disconnect the cable box, the flat-screen and easily carry them away. This is the first time a television will not be in this bedroom, in this same spot, where once I saw President Kennedy, live, laughing while surrounded by reporters. Below this scene, I was on all fours playing with my cars. That cheerful atmosphere reassured me that the outside world was a happy place.

Their original TV had a bulging glass front inside a very large metal container. It was remotely controlled by the Space Command Module, a handheld wireless with two thumb-size levers. To change the channel or volume, my Mom’s wrist would flip down, like swatting a fly, and I’d hear a loud mechanical click-clack.

I also snatch the remote for the cable box; it has twenty-odd soft, colored buttons that make no noise when pressed. Right now, I could easily lie on their bedroom carpet and enter my jumbled boyhood, but I head downstairs.

Mom’s delicate ceramic vases and figurines have always been sitting on top the living room cabinet. But the flat-screen and cable box must now occupy the stage once held by those frozen delicacies. I’ve never had the courage to even walk near them in fear of breaking them. But I sever the sacred veil and actually hold, lift up and relocate them. Mom is moaning in pain, not knowing I’m in the room.

I’m uncomfortable with television in their living room. It was a special place only for company, for rolling around when we kids had extra energy, or for when my Mom wanted to be alone, and just sit on one end of the couch and stare into nowhere in particular, escaping family responsibilities. I bet she imagined her carefree life of poodle skirts and sorority fun.

Dad shows me his drill bit which I know immediately is too thin and too short. I grimace.

He says, “Well that’s all I have. I bought it a long time ago thinking it would be useful someday”.

I honor him by accepting this bit of fatherly treasure instead of using my own. With that, I must drill a hole in the wall between the den and the cellar. Because his bit is too short, I can drill only part of the way from each side of the wall and hope the two holes meet perfectly… and… that I can make them large enough for the cable.

While I grew up, Dad built and ran a large, teeming drugstore which consumed most of his waking hours. Only a few years ago, did he apologize for being too distracted. I forgave him, it was the culture. Too many times in life, though, I chose a path which I imagined brought me closer to him. Instead, it usually created difficult obstacles and dubious results. How would Dad do it? Even though I earned an advanced engineering degree, I would first think of his probable choices, which were usually satisfying but not optimal. His approach relies on cleverness and instincts passed from his carpenter father and his ancestors, who built the wooden shtetls in the old country. Dad’s creations are often beautiful works of will over matter, solutions to problems he created as solutions to the original problem. Other times he solves a problem with brilliant simplicity.

Dad shines a spotlight on my hands-at-work. I feel important. I run through the den, which houses a shredder, an exercise bike and chairs; into his shop of toolboxes, vises, a furnace, a laundry basket; and down into a cellar of half-century of artifacts. While smelling the moist cement, I hear Dad pushing the cable into the wall. It stops before reaching. My holes don’t connect. I try again and again.

Weakened by looming defeat from too many trips between the den and the cellar, I march upstairs. I get my properly sized, two-foot-long bit, and with a twinkling smile I hold it high. I want Dad to see it as a torch commemorating my glorious triumph of foresight, intelligence and success in life. He nods with his eyes looking down.

From the basement, I insert the bit into the drill and feeling as confident as a dentist about to gouge a tooth, I bore into the wall. It yields like mush, and the bit is completely absorbed.

“You did it!” Dad says, and my confidence soars.

Immediately after I pull out the bit, I see something gleaming through the hole.

“Can you see my light?” he says. I never thought of using a flashlight to check the holes. It’s a case of Dad’s great intuitive sense producing a simple solution.

“I see your light… Okay, Dad, push the wire through.”

Sounding like a mouse in the wall, the wire snakes towards me. Soon the tip appears and I pull it through. Just after I think to myself, “Job well done”, Dad bounds into the cellar and points upward towards the living room.

“Here’s where the next hole should go.”

Back in the living room, I move the TV cabinet to make room to drill a hole. Revealed is a two-foot area of new, clean carpeting. I remember the magical feel of that cream-colored softness, a field of clouds extending everywhere. It was wonderful for wrestling our tiny white poodle.

I feel gruesome watching sawdust spray out from the slowly sinking bit into the pristine carpet pile.

I’m that dentist who drills the wrong tooth. Only a few moments in the second hole, resistance melts.

“I see the bit. I’ll stay here so you know where the hole is.” Dad shouts, and Mom moans again. I push a new wire into the hole and connect it to the cable box. I turn and say,

“My bottom hurts.” She doesn’t look at me.

Without replying, I go downstairs. I know we have nothing for her bedsore until the nurse returns. I arrive in the cellar to see Dad pointing to the new hole.

While my father again uses his flashlight to track my quickly moving hands, I connect all the wires and staple them into place.

I remember watching Dad disassemble a small gasoline engine, meticulously cleaning every part, and then screwing and bolting all the pieces together. His hands were thick and strong as he confidently commanded each tool to perform its task. Carrying it back into the garage, he attached it onto our go-cart.

I hopped in, heard him pull the rope behind me, and the engine came alive.

I could feel his fingertips against my ribs as he held onto the seat. “Now slowly press the gas.”

The cart started moving. My hands held the wheel tightly, and I could hear my father’s breathing and happy grunting inches away. I looked into the sky, knowing we could soar above the world—my Dad as Batman and me as Robin. I still love engines and cars.

“C’mon Dad, let’s go upstairs and watch TV together,” I say with a smile.

In a two-man parade, I feel strong with Dad by my side. We victoriously march back from the war and return to Mom.

Mom is eager to watch television after lying in the living room for so long and, staring into nowhere in particular. I bet now she imagines the joys of her old family responsibilities.

I turn on the TV and it works! Both my parents smile at me. I smile back.

I know he has different kinds of love for me. This one is conditional, but I’ll take it.

On the television is Jeopordy! where Alex just announced the final category, “French Literature”.

His voice sparkles. “Its first chapter recalls ‘the little scallop-shell of pastry, so richly sensual under its severe, religious folds’.”

I blurt, “Remembrance of Things Past”!

The three contestants are quiet.

A buzzer sounds and Alex says, “What is Remembrance of Things Past?”

“All thanks to you two for sending me to a mighty fine college.”

They both look at me with love and admiration, as they had at all my life milestones, but today I savor that spotlight more deeply because I want my parents to shine on me, for a long, long time.

3 thoughts on “A Light Through Time”