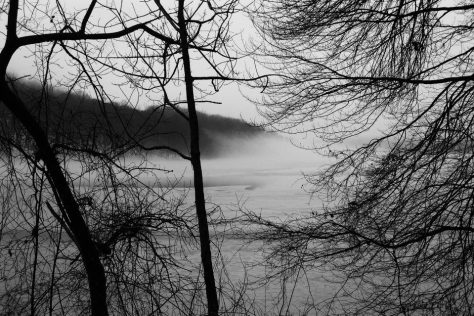 n our town, legend has it, we are sometimes visited by   goblins and fairies not always friendly and tame.

rom an early age, all of us have heard tales of this,  and we would sometimes laugh them off,  while other times, perhaps evenings when the fire burned long and the moon was hidden, we felt their reality in our bones. This one night, dark and moonless, with storm clouds a-gathering, we heard a scream in the woods behind our cottage. At first we thought it was a fox calling in the dark for a mate. It was an eerie unmistakable screech. “Tis a fox!” we said aloud. “No,” grandmother insisted, as she tightened her shawl and shivered. “This is no fox tonight.  It is a ghost,  trapped in the hollow of a tree.” Now , we were but nine or ten at the time and did not know what to think or believe,  so we pressed her for more details. She hesitated and then began: “Children, you must know right here and now that to speak of such things is to make them come true. On such dark and moonless nights as this it is best to retreat to bed and pull up the covers.” Oh, but it was too late. We wanted to know what grandmother knew. We were like Eve in the garden. The apple before us was to be devoured,  and the consequences thereof would be welcomed or not. Grandmother proceeded only in a low voice as if not wanting God to hear her: “Children, when some people die, their souls get lost. Not to heaven and not to hell and not to purgatory either.” “Would it be limbo in which they are trapped, grandma?” we asked thinking we knew in advance her answer. “No. Some souls are destined not for heaven or for hell or for the temporary stay in purgatory. Some souls wander the skies until they become so heavy they fall to the earth,  and during that fall some never make it to the ground. Instead they are tangled in the branches of trees,  and from there they slip into holes in the bark.” By then we could all picture this clearly in our young and wild imaginations. “What you heard just then, dear children, was a soul a-trapped in a tree. Tomorrow we shall take a jaunt into our woods and we will find it.” By morning the sun rose ferociously erasing all fear and trembling. Our desire to walk in the woods to look for a ghost trapped in a tree was deleted entirely from our young minds. Instead we frolicked in a meadow and threw bones for our dog to fetch.

little village in the mountains many years ago tells a tale

of two boys, childhood friends, who disobeyed their parents’ wishes and went a-swimming in a pond thought to have been bottomless. The entire village heard story after story of youngsters who drowned there or who disappeared into the deep never to return. One bright sunny afternoon, these two boys, one older than the other, took off their clothing and jumped into the ever so deep pond. They splashed around as boys do, having fun, teasing one another, racing, diving deep, taking turns holding their breath for as long as they could and  carrying on other activities such as only little boys know. Suddenly, as they reached the far shore of the treacherous pond, to their amazement they saw a gaggle of mermaids sunbathing on the rocks. There were several blondes, several brunettes, several redheads and one raven-haired beauty that appeared to be their leader. Each and all was fair and beautiful, with long flowing hair and bare bosoms like ripe fruit that made the boys gasp as they treaded water in astonishment. Below the waist the mermaids were all fish,  with scales and tails. For a minute or two of utter shock, the boys soaked in the marvelous vision before them, until the raven-haired leader pointed her long fingers, covered with rings made out of sea shells, at the older boy and then without warning or hesitation dove into the pond and swam toward him like a lightning bolt. The young boy froze as the dark-haired mermaid grabbed his friend and sank into the deep with him kicking and screaming, protesting loudly in fright. The remaining mermaids sunbathing on the rocks all laughed as the young boy swam as quickly as he could to the opposite side of the pond, procured his clothing and ran home.  The older boy’s parents and many adults from the village rushed to the pond to search for the lost boy. The sunbathing mermaids were gone and the sun was beginning to set. Several adults went on to the waters in a tiny boat. They did circles up and down and around calling the boy’s name and pleading with God to spare him. Then just as the sun was losing its might behind the horizon, something emerged from the water to everyone’s shock and awe. There they saw the boy with a seashell crown on his head, his fingers in a web and his legs encased in the fin of a large fish. He was sitting on a rock gasping for breath but waving the searchers away with frantic gestures! This moment did not last long, for the sun had set and darkness prevailed as the villagers returned to their homes. The next day they erected a sign at the pond forbidding swimming and fishing and warning of mermaids that devour humans and turned them into fish. Especially it said, boys who disobey their parents!

here once lived deep in a dark forest a couple in a clay cabin who had a beautiful child. The child, named Diana after the goddess of the moon, had been born one full moon night in summer. Her hair was dark and her eyes were dark but her skin was fair like marble. The girl’s voice was like haunting music,  and her delicate fingers could weave baskets and make other things like an adult when she was still a very young girl. Now at that time, in that section of the world, children who were exceptionally beautiful were thought to be an omen of bad luck. The burden of their beauty was seen as a curse; therefore, her parents,  who loved her and wanted her protected,  would not willingly show her to others or bring her to town for others to gawk. Still, you know how people gossip and the word got out. People knew she was there and sometimes they would prowl close to the clay cabin to catch a peek or even to call out her name just to watch her turn with squinting eyes into the forest to see who it was. One day a stranger approached on horseback. The horse was bigger than a normal horse,  and blacker.  and the rider too was tall in the saddle with a big dark floppy hat that hung low and covered his eyes. He had come to ask for a drink of water before proceeding on his way. Diana heard the man ask for water as she was weaving inside, so she filled a wooden bowl and without being asked, she went to the door holding the bowl and offered it to the stranger. He bent down and took the bowl from the beautiful child’s hands and sipped the water slowly while never losing her glance and never unlocking her gorgeous young eyes from his. When the bowl was empty, he tipped his hat to Diana’s mother and rode off among the trees disappearing like a dream.

A few days later, Diana disappeared. It was then, of course, that her parents felt the curse of their child’s beauty and intuitively they knew the stranger on horseback had somehow abducted her. Diana’s father set out into the forest with a shotgun to pursue the stranger. Already his heart had prepared him for grief,  assuming that his little girl was dead. The father’s horse was old and unsuited to the terrain. His search was futile,  and even though many others helped over the years, Diana was never found. Her parents never were to learn that twenty years later, an old man would fall from his large dark horse and be taken to a doctor with wounds that were very severe. The old man had been sloppy with drink and he stank of maliciousness. Someone wrote down his deathbed confession: “The beautiful child, Diana, twenty years ago, ‘twas I who stole her since I was so hypnotized by her beauty. She was as a demon that intoxicated me and made me come to get her one moonless eve when he parents slept. I convinced myself I was in love with her and vowed to marry her when she matured but she tried and tried to run from me and that made me so angry that I vowed to restrain her once and for all. I cut out her heart and ate it over a fire while my horse whinnied in the background. For this and all my sins I am sorry.  But remember please this demon child bewitched me. I am only a man at last!”

Still to this day,  there are those who say Diana’s face can be seen on full moon nights in summer.  But to only those pure in heart.