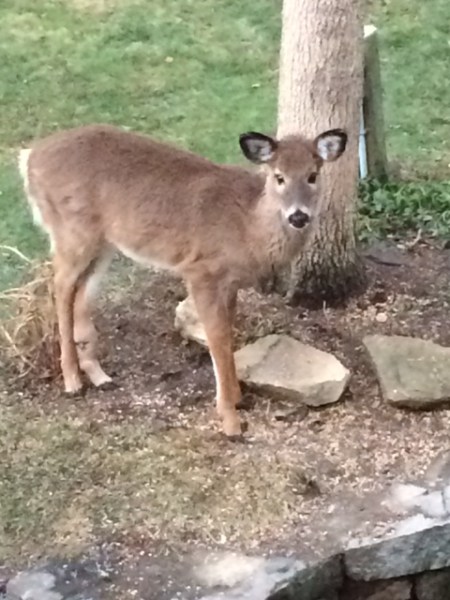 My wife looked out upon a single fawn

that gnawed, unaware, at the hedge

beside the rock garden on this first day

“There’s something wrong with one of its legs,”

she told me with a frown.  As it grazed its way

to the yew bushes along the front walk, I could

see that she was right.

The deer was young, a few months old at best,

from its size, left hind leg hobbled a bit by

what seemed a tumor that shackled her

The fawn foraged in solitude amid a carpet of

snow, cast out perhaps from the herd to fend

alone all predators, to ward off the dark, to

die at last a solitary death and take with it

the blight it bore.

Was this the lone deer we saw below our

on the birdseed I had scattered beneath

the feeder? We’d thought it odd to see

as she fed, the nap of her young fur smooth

and gleaming in the moonglow. We hadn’t

noticed in that swath of silver light the knob

that hobbled her, her outcast plight.

As the shadows lengthen on this longest night,

I’ll seed again the snow beneath the barren ash,

will scatter far and wide the feed to brook the