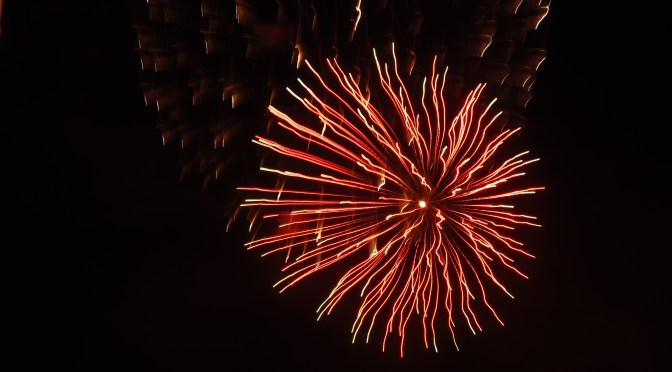 Driving home after dark, chapped- lipped and thirsty. Too tired to wrestle with my bag for the lip balm tucked in a side pocket, so I open my mouth wide and stretch my cheeks back, brandishing an excited killer clown

face. Not a sight to see in one’s rearview mirror if one could. But I have the idea that this move, a rigorous pulling back of the cheeks and the use of some highly underrated eye muscles, will restore my lips to a more lubricated state.  A little lip calisthenics, if you will, a one- two, one- two. But instead it feels like I cracked skin, and at seventy miles per hour my body is stunned and tingling.

Motionless except for my eyes, which are a little teary but strangely rejuvenated, I scan the road side to side, then look straight down the horizon and just breathe. I breathe in the white lines, red taillights, glints of chrome and tree limbs caught in high beams.

I press hard on the gas and wait for the trickle of blood from my lips, but none comes. I consider a dome light inspection but push on the CD player instead.  It’s Television, a 70’s punk band- more energy than I want, but I leave it.

“I remember how the darkness doubled, I recall lightning struck itself…” Tom Verlaine sings, in his tight shrill voice, kind of sexy and irksome at the same time, like my lips, which lightning must have struck as well, and I almost do the clown thing again but stop myself.

Maybe I should grope for the Vaseline. Why didn’t I in the first place?

But then, memory is like flypaper, catching and holding onto things until it self-destructs or falls away for lack of room. No Admittance, This Way Out.  And to remember gem and drivel on the same sticky spot can take its toll on glue– not good glue but that white paste you used in the early grades that you could almost eat.  So much pasting: lessons in memory graduating to papier mache and then somehow to the olfactory glands, as I recall.  A funny label for the thing that distinguishes smells, “the old factory glands”.  Makes me think of bad smells actually, having been bussed alone on the turnpike past New Jersey smokestacks often enough.  (The “old factory” glands worked too well.)  I thought it should have been called the ‘nu-factory’ gland, it sounds so much more pleasant.  But I never said so, as I recall.

It’s all relative. An experience spot in the brain, the part with the most stick, or lack thereof: memory.

The car ahead of me is not even driving the speed limit. I roll my eyes which feel pretty good, and change lanes.

When I was five I woke in the middle of the night clammy with sweat and so thirsty it was all I could do to drag my rag doll legs into the kitchen.  I craned my neck, and on tippy- toe tugged at the freezer door.  A cloud of frost charged out like an excited friend with cold kisses for my face.  It felt divine.  I remember licking my lips before planting them in the freezer on open ice still tippy toed.  And if I hadn’t spotted the Baby Ruth’s on top of the fridge, I would have noticed that my lips were stuck.  Seriously stuck. Just as serious as the so-called Lifesaver up my nose, weeks before—I was on some kind of streak.  And although tears may have loosened my lips it was fear that struck first and hard, like lightening might.

What to do?  I couldn’t move without ripping something.  Maybe I would just die there- fused to the ice.  Maybe lose my lips.  Mom would have been mad about the lips- but not right away, after they were glued, or sewn, or slapped back on.  She was handy at times.  She got the Lifesaver out; she needed it more.  But anyway, my legs were cramping from balancing on my toes, and my toes were locked in place and it hurt to pull away. A LOT. And if I had let go…if I fell… my lips…  I looked up at a box of frozen peas and something in foil and must have yelped.

“What are you doing?!”   My brother’s voice and kitchen light caught me like a thief.

He dripped warm water on my lips and carried me to safety.

“What the heck were you doing?” he asked again, tucking me in.

The next morning I had the measles.

I hit my first red light on the Saw Mill Parkway at Readers Digest and have a chance to check myself in the mirror. Yes, it’s me and still no blood or blotches.  I reach for the lip balm as the light goes green and it starts to rain. A nice cup of coffee and a few Advil would do the trick.  The wipers make time with Dave Brubeck’s “Take Five”.

My dad got me into jazz.  I used to hate it. How he would sit with his knee jerking a mile a minute, letting his cigarette ash drop to the floor- his hands busy thumping notes on the chair.  I told him it was crazy music. He told me I was crazy.

Now merging onto I-684, and still some glue left. Snatches of time and necessary things- bits and pieces pulled off shelves and into daylight.

Like the lip balm, or big brothers, or music that soothes us. And Baby Ruth’s.   All things we need.

On I-84 there’s a trooper hiding in the divider and I slow down.

2 thoughts on “Necessary Things and Other Ramblings”